Waris Dirie was born as a daughter of a nomadic family in 1965 in the region of Gallacaio, in the Somali desert on the border with Ethiopia.

At the age of five years, she suffered the inhumane procedure of female genital mutilation. This terrible crime against women is practiced worldwide by Muslims and Christians.

According to WHO estimates, 8,000 girls become victims of this incredible brutality every day.

At the age of 13, Waris fled from a forced marriage with a man who could have been her grandfather. After an adventurous escape, she arrived in London and worked as a housemaid and at McDonalds.

At the age of 18, she was discovered as a model by the famous British celebrity- photographer, Terence Donovan, and photographed for the Pirelli Calender.

She moved from London to New York and became one of the first African Supermodels receiving an exclusive agreement with the cosmetic group Revlon. She also graced the front pages of all the major magazines.

She appeared as a James Bond Girl, alongside Timothy Dalton in “The Living Daylights”.

The BBC commissioned the programme “A Nomad in New York”, based on Waris Dirie for their series “The day that changed my life”.

The US based famous journalist, Barbara Walters, interviewed her on behalf of NBC. Waris was also interviewed by Laura Ziv for the magazine Marie Claire, in which she decided to tell about the cruel ritual of female genital mutilation and also her own destiny resulting in a wave of sympathy and protest worldwide against FGM.

She travels on behalf of the United Nations around the world, participates in conferences, meets presidents, Nobel Prize winners and movie stars and gives hundreds of interviews to draw attention to her mission.

Waris Dirie has received many prestigious prizes and awards for her work and books, such as the “Women’s World Award” by President Mikhail Gorbachev (2004), the “Bischof Oscar Romero Preis” by the Catholic Church (2005), the “Woman of the Year Award” by the magazine “Glamour”(2000), the “Afrika Preis” by the german Federal Government and the “Corinne Award” by the holding organization of the German Book Trade for the best factual book.

In 2002 she founded her own foundation, called “Waris Dirie Foundation” to support her work as a campaigner against FGM.

In 2010, the Foundation was re-named “Desert Flower Foundation” to reflect the broader approach to addressing Female Genital Mutilation though economic projects in Africa.

The foundation’s team is made ​​up of men and women committed to gender equality, human rights and all of them share Waris Dirie’s ideal: Ending Female Genital Mutilation.

The Desert Flower Foundation and all its campaigns, projects and activities are financed by private donations.

The key work aspects of the Desert Flower Foundation are:

In 1997 Harper Collins in New York published Waris Dirie’s biography “Desert Flower” and the book quickly became an international bestseller. Since then, the book has been published in 65 licensed editions, was number 1 on the bestseller lists in many countries (in Germany, for example, the book stayed in the Top Ten list of best-selling books published in the magazine ‘Der Spiegel’ for a total of 120 weeks) and has sold more than 11 million copies worldwide.

From a nomadic life in the Somali desert, to the most exclusive designer runways in the world – a wonderful dream. But also a nightmare, because Waris Dirie became a victim of a cruel ritual when she was five years old: she got circumcised. In “Desert Flower” she breaks through her longstanding silence and tells her touching story. Today she is fighting as UN Ambassador against female genital mutilation, which happens to 8,000 girls every day. ››I know that “Desert Flower” contains an important message which is shared by all people: the respect for human dignity. « Waris Dirie

After 20 years, Waris Dirie initially returns to Somalia and meets her family again. After such a long time in the western world, Waris's arrival in her homeland, most of all her reunion with her mother and also the dispute with her former life, will be a personal challenge for her. In the fascinating resumption of her autobiography “Desert Flower”, Waris Dirie conveys a compelling and touching picture of life in Somalia: on the one hand, a great variety of traditions but on the other hand, the archaic distribution of roles, which particularly puts the country´s women in chains.

Bestselling author and UN Ambassador Waris Dirie, who experienced the horrible agony of FGM when she was five years old, was the first woman who spoke about this terrible torture in public. Now she continues the story of her life, from the day she broke her silence: Waris reports about encounters with victims and perpetrators, about tiring  research, and from throwbacks to  successes. “Desert Children” is in many ways a shocking book but it is also a book full of strength and hope for millions of women worldwide.

Letter to my mother

UN Ambassador Waris Dirie shows herself from a very personal side: as a tireless fighter against the ritual mutilation of women – mainly because of her own, painful experience. The words Waris Dirie could never say to her own mother, she puts down in a long, emotional letter. Prosecution and reconciliation are considered at the same time, and she writes relentlessly openly about the dark side of her modelling career, which drove her to alcohol abuse. Ulrike Hübschmann transforms this letter very emotional.

Waris Dirie was born in the African Desert, and she stayed a nomad her whole life. The “white country” is too cold and dismissive for her to put down roots. Despite her international success as a model and her commitment to Women´s Rights, Waris stays a “Black Woman”, who is always suspicious to the police and a sex object for men. However, her country of origin is also strange to her. Waris Dirie speaks in her book about her anger towards Africa, a continent dominated by corruption and daily violence. As she gives birth to her son, Leon, she resolves to give to her child, what she has never had herself: a real home.

Little Safa comes from a bitterly poor family in Djibouti. Grown up in a slum, she was chosen for the role of Waris as a child in the screening of the international bestseller “Desert Flower”. The dramatic scene, in which the little girl violently gets circumcised, brings people to tears worldwide. In reality, Safa is still not cut and Waris Dirie is horrified, as she gets informed that the cutting ritual is imminent. She does her utmost to save little Safa from this terrifying destiny.

In March 2008 producer and Oscar-winner Peter Hermann (“Nowhere in Africa”) commenced with the shooting of “Desert Flower” (the budget: USD 16 Mio). The initial filming took place in Djibouti with mostly amateur actors. Further locations included New York, Berlin and London. Waris Dirie served as associate producer for the film, which was directed by Sherry Hormann.

Waris Dirie is played by an Ethiopian supermodel and the face of Estee Lauder, Liya Kebede, who had already played roles in two big productions: “The Good Shepherd” directed by Robert De Niro and “Lord of War” by Nicolas Cage. 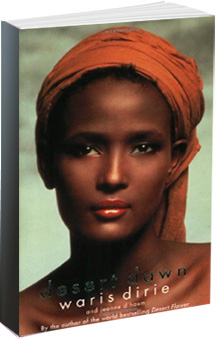 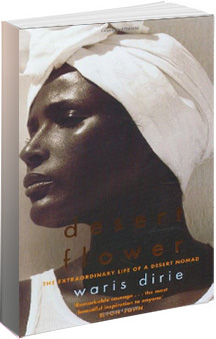 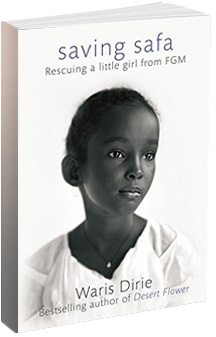 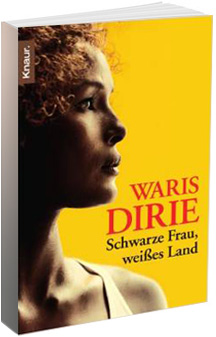 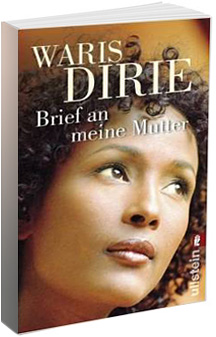 Waris Dirie
Letter to my mother
in paperback 9,99 € 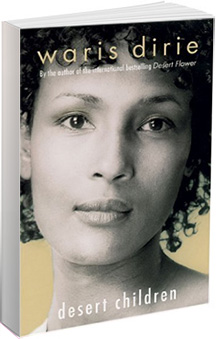 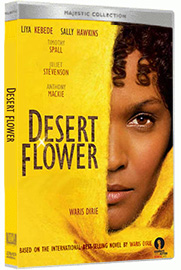